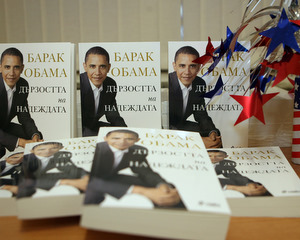 The Bulgarian edition of Obama's book "Audacity of Hope" was presented in Sofia in December. It is Obama's first book to be published in Bulgarian, and was translated by Novinite's Editor-in-Chief Ivan Dikov. Photo by Yuliana Nikolova (Sofia Photo Agency)

On April 9, 2008, the then Senator Barack Obama, while still competing with Hillary Clinton for the Democratic Presidential Nomination, commented on Bulgaria before the Senate Foreign Relations Committee during a hearing of several Ambassadorial Nominees, including the current US Ambassador to Bulgaria, Her Excellency Nancy McEldowney.

Here is what the future American President told McEldowney who was heading for Sofia (quoted from www.barackobama.com):

After a difficult transition from communism and setbacks in the 1990s, Bulgaria has made impressive economic strides in recent years. As a potential hub for oil and gas distribution, the country could play an important role in Europe's future energy security. However, Bulgaria continues to struggle with corruption and the corrosive influence of organized crime. Any failure to address these challenges could jeopardize the country's future cooperation with the European Union and, with it, much of the progress that has occurred in the recent past.

Ms. McEldowney, you will need to work aggressively to assure that the democratic backsliding which has happened in some other parts of Eastern Europe does not occur in Bulgaria. The country's institutions and judicial system will need your support and assistance in order to help Bulgaria remain on course toward full Euro-Atlantic integration. In recent years, the United States has dramatically reduced its financial assistance to Bulgaria, so you'll have to be creative. But your exemplary record as a member of the Foreign Service bodes well for your work on these critical tasks."

On November 2, 2008, a couple of days before the US Presidential Elections, Barack Obama "won" decisively against John McCain the mock US Presidential Elections in the Bulgarian Municipality of Karlovo. Obama received 59,4% of the votes vs. 40,6% for his Republican opponent John McCain winning by a lead of almost 20%. The experimental elections were held at the initiative of the US Embassy in Sofia, and the Karlovo Municipality.

On November 6, 2008, just after Obama was elected the 44th President of the United States, reports appeared in the major Bulgarian media that he might visit Bulgaria's capital Sofia in April 2009. Allegedly, Obama was to come to Sofia for "Natural Gas for Europe" Energy Forum organized by the Bulgarian government, which is expected to bring together a number of state leaders.

The publications that Barack Obama might arrive in Sofia for the Forum were mainly based on the promise given by US President George Bush to the Bulgarian Prime Minister Sergey Stanishev in June 2008, when Bush pledged high-ranking US participantion in the Forum. The reports about a potential Obama visit to Sofia in 2009 have not been confirmed by any official sources.

On December 8, 2008, the Bulgarian edition of Barack Obama's book "The Audacity of Hope: Thoughts on Reclaiming the American Dream" was officially presented in Sofia in the American Corner of the Sofia City Library. Novinite.com's Editor-in-Chief Ivan Dikov took part in the presentation in his capacity as the translator of the book into Bulgarian. "The Audacity of Hope" is the first book of the 44th US President Barack Obama to be published in Bulgarian.