Czech Ambassador to Bulgaria Presented with Toilet over Entropa Exhibit 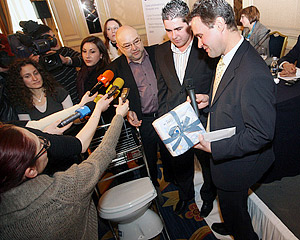 The Czech Ambassador to Bulgaria Martin Klepetko (right) received Friday a toilet as a present alluding to the depiction of Bulgaria in the Entropa Exhibit organized by the Czech Presidency of the EU. Photo by Yuliana Nikolova (Sofia Photo Agency)
The Ambassador of the Czech Republic to Bulgaria, Martin Klepetko, received a toilet as a gift during the official presentation of the Czech Presidency of the EU in the Sheraton Hotel in Sofia on Friday.

The toilet was presented to His Excellency by the Discussion Club for Social and Local Policy, a youth organization of the Bulgarian Socialist Party.

The present alluded to the depiction of Bulgaria as a toilet in the Entropa Exhibition in Brussels, which has sparked an outrage and a great deal of debate in the Bulgarian media and society.

The Ambassador of the Czech Republic accepted the gift with a smile, and said he was going to try to send it to the author of the scandalous exhibit, the Czech artist David Cerny.

His Excellency asked the representatives of the Discussion Club why they had not brought a model of Bulgaria's depiction at Entropa so that it could be flushed down the toilet, which should serve to remove all barriers and clichГ©s.

During the presentation, Klepetko pointed out that the motto of the Czech Presidency of the EU was "A Europe without Barriers", with barriers meaning something negative and artificially created.

"Our goal is a Europe without internal, economic, cultural, and value borders for the people, the entrepreneurs, and the economic actors", His Excellency declared.

In his words, the EU-wide measures to tackle the effects of the unprecedented global financial crisis would be coordinated with all member states as a matter of consensus.

His Excellency said it was not clear yet when Russian gas supplies would reach Bulgaria again but he did stress the active role of the Czech Presidency for finding a way out of the Russia-Ukraine dispute, and the importance of energy security and diversification of energy suppliers for Europe's economy.

Klepetko also announced that the Czech Presidency was preparing a summit meeting between the EU and the USA in light of the inauguration of the US President Barack Obama. He also designated Croatia as the country which was really close to joining the EU as its 28th member.

The presentation of the Czech EU Presidency was also attended by Bulgaria's Minister of European Affairs Gergana Grancharova, and by the Chair of the Parliamentary Foreign Policy Committee Solomon Pasi, who pointed out that the Czech Republic had had an enormous contribution to the development of Bulgarian culture, and that it could not be wiped out by one humorous exhibition.