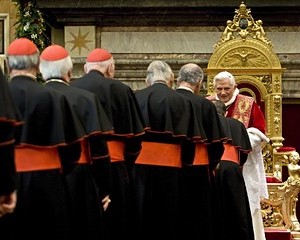 Speaking in a holiday address to the Curia, Pope Benedict XVI described behaviour beyond traditional heterosexual relations as "a destruction of God's work" and urged respect for the "nature of the human being as man and woman."

His remarks were immediately denounced as "totally irresponsible and unacceptable" by gay groups across Europe.